Chat With Us
You are here: Home / Blogs / Singapore Budget 2021 — The Highlights 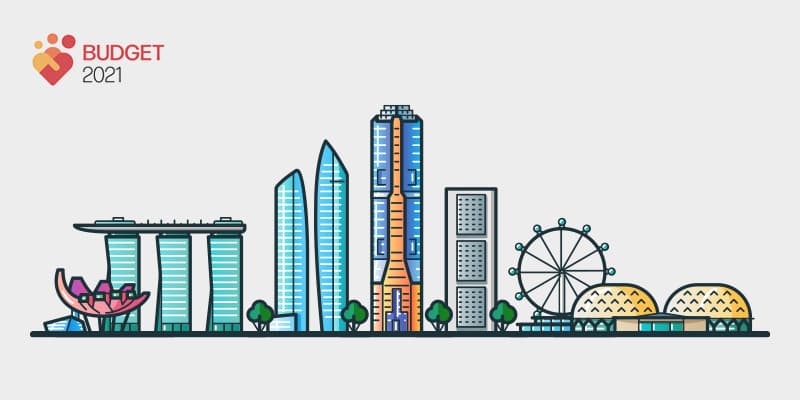 Recovery from the ongoing effects of the Covid-19 pandemic remains the focus for a second consecutive year in the Singapore Budget 2021.

Introduced by Deputy Prime Minister Heng Swee Keat on Tuesday (Feb 16), the initiatives are generally good news for everyday Singaporeans, including a delay in the GST increase, and $100 vouchers for 1.3 million households.

However, Mr Heng did emphasise that hard choices had to be made to combat the current challenges of the Covid-19 pandemic, all while making sound strategic decisions for the future of Singapore.

“Every Budget is important, but Budget 2021 comes at a particularly critical juncture,” said Mr Heng.

He said the first hard choice was to decide to draw on past reserves for this year’s Budget.

“We have now done so for two consecutive years, which is unprecedented. This was a difficult decision, but necessary given the exceptional circumstances. Having unlocked the ‘national safe’ on more than one occasion in this crisis, we must now place an even greater focus on running balanced budgets post-crisis,” said Mr Heng.

“Climate change has become a more urgent challenge. Sustainable development will be an even greater priority for Singapore. Over the years, we have taken steps to reduce vehicular emissions. Raising petrol duty rates builds on this momentum,” he added.

We take a look at 12 highlights of the 2021 Budget, and what it means for Singaporeans.

The Singapore Government has committed to setting aside an $11 billion Covid-19 Resilience Package to fund Singapore’s pandemic recovery efforts. Of this fund, $4.8 billion dollars will fund the safeguarding of public health, including the provision of free Covid-19 vaccinations to eligible Singaporeans.

The Covid-19 Resilience Package will be drawn from reserves — the second year in a row it has done so. $1.7 billion in total will be taken from reserves to combat that Covid-19 pandemic. This amount will be combined with the $9.3 billion that was drawn last year, but not actually used.

The 2020 Budget declared a GST rate increase of 2 percent from 7 percent to 9 percent for 2021 — however, this will no longer be implemented this year.

The GST hike has been deferred to sometime between 2022 and 2025, but "sooner rather than later", depending on the economic outlook, said Mr Heng. He added that the GST rate increase was critical to meet the rising costs for social responsibilities, especially healthcare.

The previously announced $6 billion Assurance Package designed to mitigate its negative impact is still in place.

3. GST to Be Introduced for Low-Value Imported Goods Purchased Online

As of Jan 1, 2023, GST will be payable on imported low-value goods purchased online.

Non-digital services such as online fitness training, telemedicine, and online counselling will also have GST added to their purchase price.

Mr Heng said this would help to level the playing field for local businesses and help them compete with lower-cost foreign products and services.

As it stands, low-value goods worth $400 or less imported via post or air are not liable for GST charges to aid border clearance, but the tax is paid on equivalent goods bought in Singapore.

All goods that come into Singapore by land or sea are already taxed irrespective of their value.

Mr Heng added that overseas suppliers of goods and services should be subject to the same GST requirements as local producers.

New bonds valued at up to $90 billion will be issued to finance long-term infrastructure in Singapore, including new MRT lines.

The proposed Significant Infrastructure Government Loan Act (Singa) has a limit of $90 billion for borrowing and is set to fund the significant, long-term infrastructure projects for the next 15 years.

"This approach will allow us to spread out the lumpy costs of such infrastructure investments more equitably across generations," said Mr Heng.

The bonds also allow the Government to take advantage of current low-interest rates.

5. $870 Million in Assistance for Aviation Sector

Perhaps no sector has suffered more from the Covid-19 pandemic than the aviation sector, which warrants additional support and an extension in cost relief. The assistance will cost the Government $870 million over the next year.

Mr Heng says he expects the sector to use the current lull in activity to prepare for recovery and upgrade its capabilities to remain competitive.

Government assistance will not last forever.

Speak to us now

Everyday families are a substantial focus of the 2021 budget, with a $900m Household Support Package being phased in over the next year.

The support package includes a range of assistance measures, including vouchers to cover household expenses and help local businesses, rebates for service and conservancy charges (S&CC), and goods and services tax (GST) vouchers.

About 1.4 million low-income residents will get an extra GST voucher classified as a Cash Special Payment of $200 on top of the regular GST Voucher Cash payout. This voucher is set to be given in June.

An additional utility rebate of between $130 and $200 will be granted to around 950,000 households in July under the GST Voucher – U-Save Special Payment. This works out to 1½ times their usual yearly rebate.

Depending on eligibility, households that live in Housing Board flats will also be entitled to rebates equivalent to 1½ and 3½ months of S&CC for 2021.

7. Petrol Prices on the Rise

In the continued bid to make Singapore less reliant on internal combustion engine (ICE) vehicles, petrol prices are set to rise in 2021.

However, there will be some rebates to ease the burden of these price rises, with a particular focus on those who drive for their income.

Private-hire and taxi drivers will receive a 15 percent rebate on their road tax for one year, as well as a $360 rebate on petrol duty. Conventional ICE vehicles will be given a one-year rebate of 10 percent.

Continuing from Singapore’s drive to reduce reliance on ICE vehicles, the Government has announced its plans to more than double its original 10-year target for installing electric vehicle charging points.

$30 million will be allocated over the next five years for initiatives related to electric vehicles, including having more electric vehicle chargers on private properties.

In an effort to encourage the mass-adoption of electric vehicles, the Government will also lower the price difference between electric cars and ICE cars.

Currently, the Additional Registration Fee (ARF) for all cars is at least $5,000. From January 2022 to December 2023, the minimum ARF for electric cars will be lowered to zero.

The Job Support Scheme (JSS) and its related wage subsidies will be extended by up to six months to assist businesses that continue to be negatively affected by the Covid-19 pandemic.

The subsidies, ranging from 10 percent to 30 percent will cover wages from April to September 2021 from companies operating in sectors that have suffered the most during the pandemic, such as aerospace, aviation, and tourism.

Companies outside of the worst-hit industries, like retail, food services, marine and offshore, arts and entertainment, will have their JSS extended from April to June 2021.

Starting 1st Jan 2022, only 18 percent of the total Singapore manufacturing workforce can be foreign.

This S Pass quota for the manufacturing sector will be cut further to 15 percent from Jan 1, 2023.

As it stands, the S Pass quota for the Singapore manufacturing sector is 20 percent of all employees.

The overall quota for workers on work permits and S Passes in manufacturing will stay at 60 percent.

This reduction in quota is part of the Government’s previously announced 10-year plan to grow Singapore’s manufacturing sector by 50 percent. The plan is an effort to help the Singapore manufacturing sector keep its approximate 21 percent share of gross domestic product (GDP) over the coming years.

11. Taxi and Private-Hire Drivers to Get Higher Payouts

The fund will give taxi hirers and full-time private-hire drivers in the P2P transport sector $600 per vehicle each month between January 2021 and March 2022, up from the previous $300. This funding will be reduced to $450 a month between April and June.

The arts and cultural sector and the sports sector will have their respective Resilience Packages extended for 2021.

While there is continued financial support for affected sectors in 2021, it is still crucial to ensure that your company has built financial resilience for sustainability.

Speak to Us Today

What Is IR8A? Your Guide to Filing Employee Earnings in Singapore 2022
Manufacturing Sector in Singapore To Grow 50% By 2030