You are here: Home / Singapore Industry Guides / Starting a Trading Company in Singapore 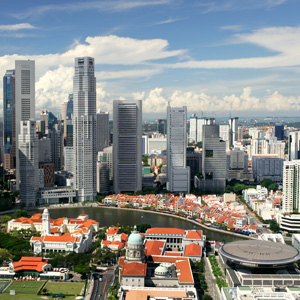 Trade continues to be the key pillar of Singapore economy, which is presently diversified into various sectors ranging from manufacturing to financial services. Trading remains a dominant activity and the very foundation for Singapore’s modern history was laid when it blossomed into an Entrepot for the regional and eventually the global trade. Singapore’s economic stature has magnified over the years while its geographic size and resources are incredibly disproportionate. Ranked by World Trade Organization as the 16th largest trading nation in the world, Singapore’s trade is 2.7 times its GDP.

Some of the factors that promote the attractiveness of Singapore as an international trading hub are:

Singapore has a simple and straightforward regulatory framework to govern the trading activities in Singapore. Some of the key facets of starting and conducting a trading business in Singapore are discussed below.

In order to engage in import and export activities in Singapore, the company or business should first be registered with the Accounting and Corporate Regulatory Authority (ACRA). Entities of any type can be registered with ACRA. On successful registration with ACRA, the business or company will be given a Business Registration Number which is also its Unique Entity Number (UEN). UEN is a prerequisite to interact with any government agencies. An entity must mention its UEN in every application made by it for a permit, license, certificate or other document under the Regulation of Imports and Exports Act (Chapter 272A).

All importers, exporters and declaring agents are required to activate their UEN with Singapore Customs. All entities with a valid Unique Entity Number (UEN) can activate their Customs Account. Generally the activation is done within the same working day. The activation is free and the Customs Account is valid for as long as the entity remains registered with ACRA. The registration of an entity with the Director-General of Customs (the Director-General) under regulation 37 of the Regulation of Imports and Exports Regulations (RIER) is subject to certain conditions and non-compliance may result in suspension or removal of the name of the entity from the register.

Goods are classified as controlled and non-controlled goods. Trading of non-controlled goods does not require licenses. For trading controlled goods such as drugs, chemicals, animals, food products, etc., a license must be obtained from the Competent Authority (CA), government agencies that regulate the controlled goods. Trading in certain items is strictly prohibited in Singapore. So before goods are imported or exported, the classification of goods must be rightly identified, in case of doubt, a Classification Certificate may be obtained from the Singapore Customs by submitting an application online with relevant supporting documents. Then the importer may apply for the license to import from the relevant authority.

In general, for import of all goods (controlled or non controlled items), an Import Permit – IN permit is required. It must be secured before the goods are imported into Singapore and it can be obtained online via TradeNet®. An IN Permit is required for each shipment of goods that enters Singapore.

When importing high-tech products, the importer may need to apply for an Import Certificate and Delivery Verification (ICDV) from Singapore Customs. The high-tech products may be subjected to restriction in the countries from where they are imported. In such cases generally, the exporter in the exporting country will ask the Singapore importer for an ICDV from Singapore. Items covered by an ICDV must be imported into Singapore directly, and are not to be diverted to other countries.

When exporting to treaty partners, such as FTA partner countries, a Certificate of Origin (CO) may be required for the buyers in the FTA partner countries to avail the treaty privileges. A CO is a proof of nationality for the goods. The Rules of Origin (ROO) will be applied to determine if the locally manufactured products qualify as Singapore-made.

CO is of two types – Ordinary and Preferential. Goods with 25% local content will be given an Ordinary CO and this is merely to prove that the goods were made in Singapore. If the local content makes up between 30%-50% of the product then a Preferential CO will be issued and this will entitle the buyers to claim preferential tariffs given under Schemes of Preferences and Free Trade Agreements (FTAs).

A special permit called JNTDEC3 must be obtained before exporting, re-exporting, transshipping and transporting of goods that are governed by Strategic Goods (Control) Act. The Act covers all goods and technology that are intended or likely to be used for weapons of mass destruction.

Goods that are subject to customs & excise duties are known as dutiable goods. Duty is payable if such goods are manufactured in Singapore or imported into Singapore. Dutiable goods in Singapore are intoxicating liquors, tobacco products, motor vehicles and petroleum products. Duties are levied on an ad valorem basis or specific rate basis. Duties payable are temporarily suspended when goods are:

All Goods that are imported into Singapore are subject to a GST of 7%, if the goods are meant for local consumption. The GST taxable is calculated based on the CIF (Costs, Insurance and Freight) value plus all duties and other chargeable costs, whether or not shown on the invoice. GST payable are temporarily suspended when the goods are:

Immigration and Checkpoint Authority (ICA) officers conduct checks on vehicles, cargoes and persons entering the country, and refer trade and customs matters to Singapore Customs for follow-up. Clearance procedure depends on the type of cargo and the mode of transport. Some documents that need to be produced at the point of clearance are as follows.

For export of non-dutiable and non-controlled goods by air or sea, the trader can clear the cargo through the checkpoint without a Customs Permit.
For air consignment, submission of Outward declaration for approval can be made within three days of the export of the cargo, whereas for sea consignment, it can be made before the departure of the vessel.

For exports of Dutiable and controlled conventional cargo and for all exports via rail or road Customs Permit must be produced at the exit checkpoints, before the exports.

For import, traders should produce the Customs IN Permit with the supporting documents such as, invoice, packing list, bill of lading etc to the ICA officers at the entry checkpoint for the clearance of the goods. Also for imports meant for local consumption GST has to be paid before clearance. For a consignment which requires partial clearance, the trader should produce the same permit each time for customs endorsement until the whole consignment is completely cleared.

LCL containers are unstuffed in the FTZ and cleared through the FTZ Out-Gates as conventional cargoes. No Customs supervision is required for the unstuffing of such containers in the FTZ.

Containers not requiring Customs examination will be given SNR (i.e. Sealing Not Required) facilitation and released by ICA officers without being sealed. Unsealed containers may be unstuffed at any time without Singapore Customs supervision.

Free Trade Zones (FTZs): These are specially designated areas in Singapore where the payment of duties and taxes are suspended when goods imported into Singapore are stored here. Duties and taxes are payable when the goods leave the FTZ and enter into customs territory for local consumption. There are 3 FTZ authorities and there are several locations of the FTZs under each control. Non-dutiable goods can be deposited in FTZs provided they are being transshipped or re-exported. Dutiable goods can be stored in FTZs, except for intoxicating liquors and tobacco products, which must be stored in Licensed Warehouses. Repacking, sorting and re-conditioning can be done in the FTZ, but you need to obtain prior permission from Singapore Customs.

Zero GST Warehouses: These are for storage of non-dutiable goods and approved non-dutiable commodities such as coffee, pepper, rubber, base metal, crude oil and petroleum products. Goods & Services Tax (GST) is suspended in ZG Warehouses until the goods are removed from the premises and enter the local market for consumption. The movement of goods between ZG Warehouses also does not attract GST. By paying a license fee to Singapore Customs a trader can convert whole or part of his warehouse into ZG Warehouse through the Zero GST Warehouse Scheme (ZGS).

In Singapore almost all traders resort to Letter of Credit (LC) which eliminates the risk of non –payment against delivery for the seller and risk of non-delivery against payment for the buyer. It is a letter of undertaking from the buyer’s bank to pay an exporter, through the exporter’s bank, for goods on behalf of the buyer. A valid LC opens up other financing options such as the following.

Back-to-Back Letter Of Credit is opened on the same terms and conditions as the original L/C and this enables a trader to procure goods from a third party for export to the buyer in the original LC.

Trust Receipts are loan from bank to procure the Goods for which the LC was opened.

Aside from LC Short term finance from banks are available in the form of:

Export Credit Insurance: It insures the goods against damage, theft and loss and also protects the exporter against non-payment by the buyer. It also mitigates the risk when dealing with new riskier markets. This also makes it easier to get loans from banks. The policy can be used as collateral and banks may be willing to charge lower rates for loans as the risks are reduced. Such Insurance provides cover from commercial risks such as insolvency of the buyer, and non-commercial risks like non-payment or frustration of the contract due to war or revolution. However, insurance does not cover risks like those inherent in the nature of the goods, for instance with perishable goods, or failure by the exporter to obtain necessary licenses needed for import or foreign transfers.

To give the local traders a leg up in the international market International Enterprise (IE) Singapore launched a Trade Credit Insurance Programme or TCI under which the underwriters provide insurance coverage for traders at attractive premium rates.

Thousands of companies trust us to get started.