You are here: Home / Blogs / Statutory Requirements of AGM and Annual Returns 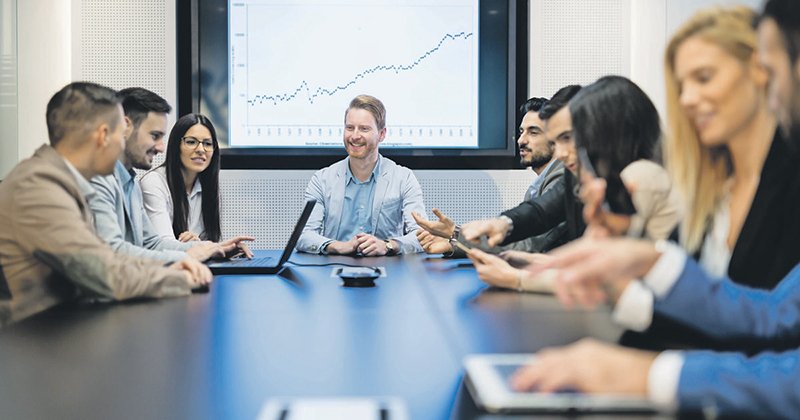 The Accounting and Corporate Regulatory Authority (ACRA) of Singapore continuously reviews the regulatory frameworks governing the companies and businesses registered in Singapore and makes necessary amendments to ensure the relevance, ease of application and efficacy to uphold the country’s competitiveness as a regional business hub. In line with this trend, ACRA has made changes to the statutory requirements governing the holding of Annual General Meetings (AGM) and filing of Annual Returns (AR).

The following key changes have been made to the requirements:

The changes will take effect on 31 August 2018. The following is an overview of the changes.

Alignment of holding AGM and AR filing with the FYE

Presently, Section 175 of the Companies Act requires directors of every locally-incorporated company to hold its first AGM within 18 months of incorporation and subsequent AGMs at intervals of not more than 15 months. Section 201 of the Companies Act requires financial statements tabled at AGMs to be made up to a date within 4 months for listed companies or 6 months for not-listed companies before the date of AGM.

The timelines have been aligned with the FYE to simplify and ease the compliance procedure for the companies. Prior to the change, the due dates for holding AGMs and filing ARs were unclear as notification of FYE was not mandatory. Now, with the FYE notification becoming mandatory, companies will have to hold their AGMs and file the AR within 6 months and 7 months respectively. So, the changes not only simplify compliance, it also establishes predictability and clarity. The following safeguards are in place to prevent companies from arbitrarily changing their FYE to circumvent compliance requirements.

As for the newly incorporated companies, who have notified their FYE to the Registrar, the anniversary of the notified date is deemed to be the FYE. In the absence of a FYE notification, the date on incorporation is legally deemed to be the FYE. Companies that wish to change their FYE may apply to the registrar via the transaction ‘Change of Financial Year End” to change the FYE. Likewise, companies that have abnormal FYEs can notify the Registrar of the same to avoid seeking approval from the Registrar every year. 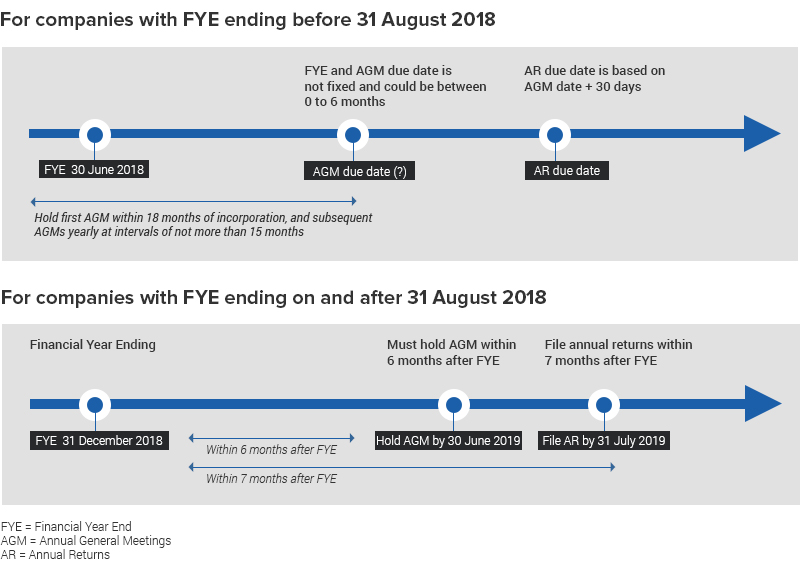 Related links: Everything you need to know about Annual General Meetings (AGM) »

Specific Safeguards for Exemption of Private Companies from Holding AGMS

Presently, section 175A of the Companies Act allows private companies to dispense with holding AGMs if all members approve to do so. To reduce the compliance burden on private companies the following to broaden the situations under which a private company need not hold an AGM have been introduced. The newly introduced conditions could also be regarded as safeguards to prevent companies from flouting regulations.

Accordingly, private companies can dispense with holding AGMs if they meet the following conditions:

However, if any member notifies the company to hold an AGM not later than 14 days before the end of the sixth month after the FYE, then the director of the company must hold an AGM within 6 months after the FYE. In case, if the director is not able to meet the deadline, he may obtain the approval of the Registrar for an extension of time to hold an AGM. If any member or auditor requests for an AGM within 14 days after sending the financial statement then an AGM must be held and the Registrar must be notified of the AGM held.

It must be noted that requirement (1) does not apply to dormant relevant companies that are exempted from laying financial statements under Section 201 for a financial year pursuant to Section 201A.

Companies that have chosen to dispense with holding the AGM can continue to do so but the timelines for filing AR and holding AGM have been realigned with the FYE. The following changes have to be considered;

While expanding the scope of the dispensation of AGM by private companies, the safeguards also uphold the interest and rights of the members of the companies and ensures consistency.

Companies with FYE falling on or after 31 August 2018 and have declared themselves as “Solvent Exempt Private Company” or “Private Dormant Relevant Company” in their last Annual Return, will be eligible to file Simplified Annual Returns if they fulfil the following requirements:

In the changed regime, ACRA will pre-fill most of the information in the AR Form; thus, simplifying and improving the ease of the filing process for the solvent EPCs and Dormant Relevant Companies, which need to only select the available options and dates indicated, and verify that the information is correct before submission.

Solvent EPC is a company gazetted as an exempt private company or a private company which no beneficial interest in its shares is held directly or indirectly by any corporation and which has not more than 20 members; and the company confirms that it is able to meet its liabilities as and when they fall due.

A Private Dormant Relevant Company is a private company which is dormant; is not listed (or not a subsidiary of a listed company); and has total assets less than or equal to $500,000 (consolidated value if it is an ultimate parent).

We are experts when it comes to Singapore’s company laws and regulations. Thousands of companies rely on us to fulfill their annual compliance requirements.