You are here: Home / Blogs / Everything to Know About Crowdfunding in Singapore

Crowdfunding is the activity of raising money (funds) from a large number of individuals (crowd) through an online platform.

The most popular examples of such platforms around the world include the following (figures as at Dec 2018):

Overall, there are now more than 600 crowdfunding platforms around the world, with fund-raising reaching billions of dollars annually. 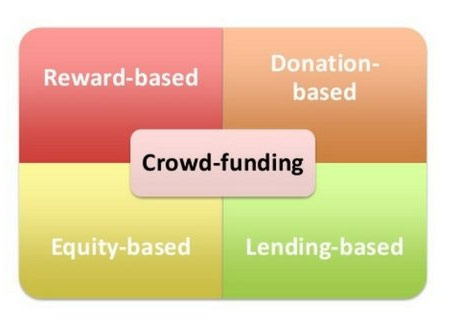 Simply put, there are three main types of crowdfunding possible.

When individuals pool their resources to support a charitable cause, it’s called donation-based crowdfunding.

When individuals give money to a company in return for a reward – which is usually a new product launched by the company – it’s called reward-based crowdfunding. A good example of this is video gaming companies, which reward gamers with advance copies of their new games in return for their funds.

It’s important to note that both types of securities-based crowdfunding are subject to securities regulations prevalent in the jurisdiction where the online platforms are based.

Notably, equity-based crowdfunding has gained popularity in the startup scene in recent years due to its win-win nature. While enabling start-ups to raise money without giving up control to venture capitalists, it also offers small investors the opportunity to earn an equity position in the venture, which may otherwise not be possible for them.

Regulation of Crowdfunding in Singapore

In Singapore, all securities-based crowdfunding (SCF) platforms – which provide an alternative mode of financing for start-ups, and small and medium scale enterprises – are licensed and regulated by the Monetary Authority of Singapore (MAS). They are granted a Capital Markets Services License (CMSL) under the Securities and Futures Act.

The Authority mandates that all licensed crowdfunding platforms must ensure proper segregation of investors’ monies and keep proper records of transactions.

“Fund-raising companies listed on SCF platforms may make small offers (i.e. raising less than $5 million within 12 months) without issuing a prospectus (an investment offering document). But they must disclose the key risks (as prescribed by MAS at a minimum) of such investments to all investors,” says the MAS.

Importantly, to make it easier for companies to raise funds, MAS has reduced the base capital requirement from $250,000 to $50,000, as well as removed the $100,000 security deposit clause. But this applies only for platforms catering to accredited investors.

If there are any breaches, MAS may undertake supervisory measures including audits, and revocation of license.

In general, MAS warns that while investing in a venture via SCF platforms, investors should evaluate their risk exposure with regard to loss of capital, lack of opportunities to liquidate your investment, fraud, and shutting down of the platform.

Additionally, if investors in Singapore invest in securities offered by an issuer in another country, their rights will be subject to the laws of that country. “You may also be subject to additional tax liabilities, transaction costs and capital controls,” the Authority adds.

In summary, crowdfunding, like all investment decisions, must be fully informed.

Related Article »  All You Need to Know: MAS Simplifies Rules for Managers of Venture Capital Funds

For donation and reward-based crowdfunding

For donation-based and reward-based crowdfunding, MAS’ regulations do not apply. In order to ensure a greater peace of mind for those who give, Singapore’s Commissioner of Charities (COC) will come up with a voluntary code of practice in January 2018.

This will mean that crowdfunding platforms of this nature including Ray of Hope Initiative, Simply Giving, Giving.sg, and Give.Asia, will be required to verify the legitimacy of the fund-raising appeal, as well as make public all the donations received and their commission or fees. Those making fund-raising appeals will also be required to disclose whether they are receiving any government aid.

The COC plans to conduct regular audits to ensure all donation and reward-based crowdfunding platforms comply with the new code.

Without doubt, the code of practice is very timely as more and more Singaporeans are turning to crowdfunding to ask for and give donations. Give.Asia which collected $4.5 million in 2017, has already crossed $10.8 million this year. Giving.sg – in over two years of its launch – is touching close to $50 million in terms of funds raised.

Singapore’s crowdfunding story started with FundedHere, which was launched in March 2015, and got its CMSL in 2016. The platform, which aims to connect high potential tech start-ups in China and South-east Asia to professional and accredited investors, has helped 17 companies raise $6.7 million in funding till date.

Another important player is Funding Societies, which has raised $319.4 million till date through its 55,702 loans.

MoolahSense, which provides a peer-to-peer lending platform to its more than 14,000 registered investors, has raised $64 million through over 670 campaigns.

Other notable examples are Capital Match (which raised capital to the tune of $110 million) and Capital Springboard (a peer-to-peer invoice finance platform with over $192 million worth of invoices transacted).