You are here: Home / Blogs / Private Sector Employers May Give ‘More Generous Bonuses’

Private sector employees will be pleased to know that they may be getting bigger bonuses this year, compared to their counterparts in the civil service.

According to a Straits Times article titled “Private employers may give ‘more generous bonuses’, private employees can expect year-end bonuses of between 2 and 3.5 months including a 13th month bonus.

This is compared to 2.5 months’ bonus for civil servants, including an annual variable component (AVC) of 1.1 months, a mid-year bonus of 0.4 months and a traditional 13th month bonus in December.

Rikvin acknowledges that bonuses in the private sector are rewarded based on the firm’s financial performance and the employee’s work effort. They may also be boosted by the tightening labour crunch which has accompanied new manpower regulations to reduce the influx of foreign talent. Companies will pay out more to retain their workers.

However, the main indications of a bigger bonus mean that the local economy is doing well, and if larger year-end payouts are found across all sectors, it would also mean that growth is evenly distributed. 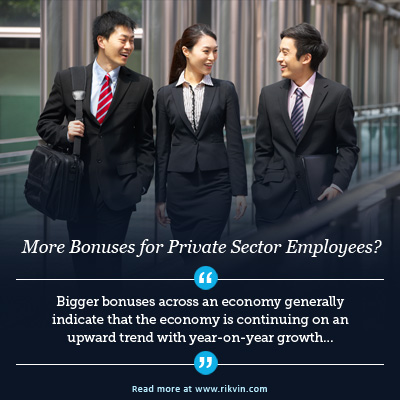 Mr Satish Bakhda, Head of Operations, Rikvin said bigger bonuses across an economy generally indicate that the economy is continuing on an upward trend with year-on-year growth, rather than periodical contractions or lags.

“This usually only happens in countries with strong macroeconomic buffers and stable business environments like Singapore. It would be unusual to see bigger bonuses across the national economy in emerging markets like China or India, where growth is concentrated in economic enclaves and business booms are not distributed equally,” Mr Bakhda said.

Advanced technology and services sectors such as information technology, life science, engineering and banking and finance should give out bigger bonuses so that they can attract and retain talent for 2014, where economic growth is expected.”

“At the microeconomic level, bigger bonuses act as a general indicator that the company or business has done relatively well, compared to the previous year. It is also an indication of a company’s view of the upcoming year. A company would give out bigger bonuses because it views 2014 as an optimistic year with business expansion and a pick-up in revenue and profits,” he continued.

Immigrants Move to Singapore for Economic and Cultural Reasons: LKYSPP Study
Bosses, Not Workers, To Be Trained