Singapore has the most attractive corporate tax rate among 10 leading Asian economies. This is according to the Asia Pacific Corporate Tax Report published by Rikvin last week.

The report, which provides an overview of the changes in corporate tax rates (CTRs) in 10 economies across North, Southeast and South Asia as well as the Pacific between 2006 and 2013, also looks into the circumstances which precipitated them.

Related Link: Read about how Singapore is still the most attractive to foreigners with income tax rates.

In addition, Indonesia, Republic of Korea, Thailand, Malaysia and Singapore have cut their CTRs and refined their corporate tax structure since the global financial meltdown in 2008. 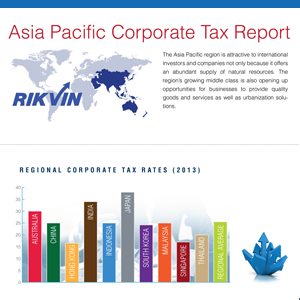 Singapore reduced its CTR from 20% in 2006 to 17% in 2010. Malaysia and Indonesia have maintained a 25% CTR since 2010. The government of South Korea maintained a 24.2% CTR for large corporations and introduced a reduced CTR of 22% for corporations with a medium income base.

Commenting on the report, Mr. Satish Bakhda, Chief Operating Officer at Rikvin said, “What we noticed, is that many Asian governments have maintained or lowered their corporate tax rates over the years to attract international investments, and stimulate entrepreneurship domestically in the aftermath of the financial crisis.”

“After studying these 10 economies, Singapore still emerged as the most attractive place to do business, tax-wise. Although it didn’t make a significant cut in its headline corporate tax rate, its effective rate is much lower for new enterprises, making it helpful for them in their initial years of business. This report brings that fact to light,” he added.

To read the full report and see the related infographic, please click here.

Need help with your corporate tax? We can help you.

For a detailed assessment of your business and the tax exemptions that you can apply for, we can certainly advise you. For a face-to-face consultation with one of our tax specialists, call us at +65 6320 1888.