You are here: Home / Blogs / 5 Problems Non-executive Directors Experience in Their Roles 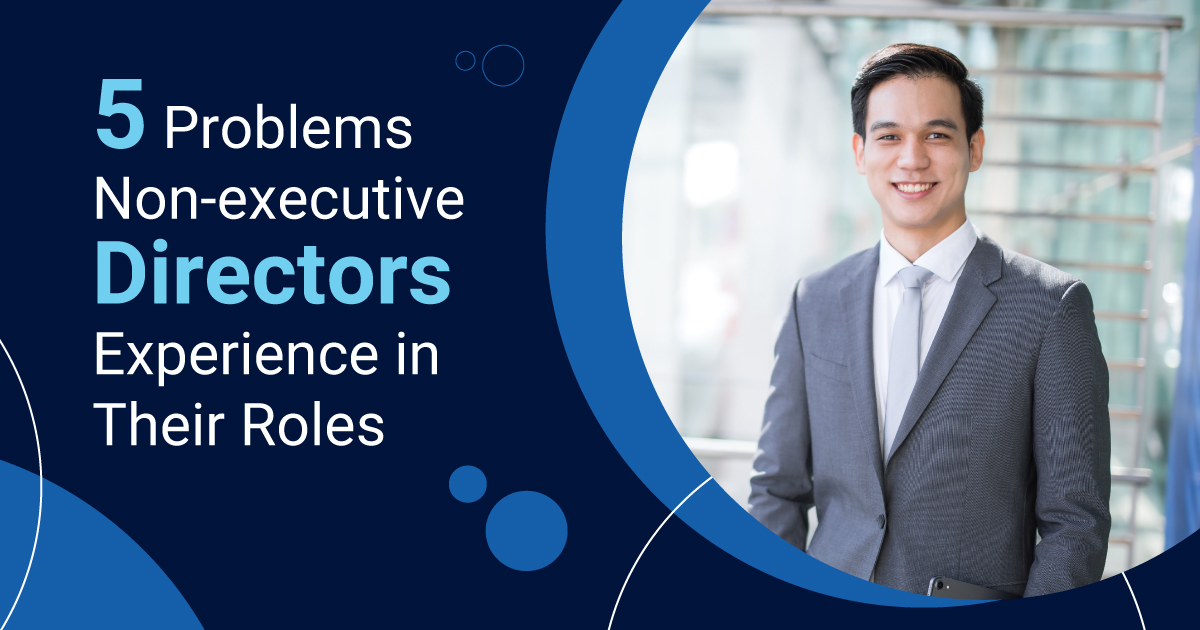 Being a non-executive director is no longer a part-time job. If you are thinking of adding this to your portfolio near retirement as a wind-down job, might want to reevaluate.

But, on the other hand, if the alternative is retiring altogether, a non-executive role is a great option.

It allows you to practice your talents, make a fulfilling contribution to the organisation while earning a handsome sum of money, and be actively involved in the business world.

Who is a non-executive director?

What are the problems non-executive directors experience?

The points mentioned above make this role sound like an attractive package.

However, other factors may influence your satisfaction levels and cause an uncomfortable transition even after setting into the role.

So, before you consider it seriously, you might want to get the whole picture. Here are some of the challenges that new non-executive directors face:

1. You no longer run the show

Coming to terms with the realisation that you are no longer at the center of things can often hit quite hard.

As an executive, you had eyes on everything, and you knew what was going on when and had guaranteed access to all the information you needed.

You managed the budget and the staff, worked closely with them and had a certain level of authority that made people listen to you.

The non-executive world is quite different from that. All the information given to you is filtered down by the executives, like the CEO.

Unless you have a meaningful relationship at the top, beyond the constraints of the corporate world, you only get what you are given and know what the executives want to tell you.

The interpersonal skills and the emotional intelligence you need to make functional organisational relationships as a non-executive director are different from those you’re used to as an executive.

This is because of the complete shift in power dynamics and the lack of any influential power base. It might seem like a small issue, but the experience can be very frustrating and unsatisfactory.

So, have a chat about how you might want to handle this. It is best to conduct research and due diligence on the organisation offering a non-executive role.

See how the company’s environment and culture will accommodate your transition and how well you can work within it.

2. The social facets of the given role are different from an executive role’s

In every working environment, there are people who are either in the “main” group or out of it.

People involved in the said group bond with their shared love for history, favorite sports team, or roles in the organisation. There is always a heavy prevalence of a group dynamic.

As an executive, you were always a part of the inner circle and shared common understanding and experiences with the members of the group. But, as a non-executive, you’re mostly going to be on the outskirts.

You’re in a position where the executives in the group know more than you do (with all the inside information), the business of their organisation, and its relationships with other businesses better than you do.

Apart from that, they know each other better than you since they’ve bonded as a tight-knit group for years.

Although the company has other non-executive directors apart from you, and all of you are in the same position, you might not get to enjoy the same perks and privileges.

This is mainly because you simply don’t get to meet that often and hence, don’t know each other that well.

There is a level of depth and emotional skill required to handle this situation.

Hence, it’s best to talk to others about how they might have dealt with a situation similar to yours and how that might fit well with your role as a non-executive director.

3. You have two mutually conflicting roles

Non-executives have two roles. The first role involves you promoting the success of the company, the benefits of investing in it, and the profit it has made to the stakeholders.

In this crucial role, you work closely with other executives to discuss how to approach this strategically for improved performance.

On the other hand, the second role puts you in a monitoring position. As a core member of the audit department or committee, you are trusted to ensure that the financial reports and systems are suitable.

Or, as a member of the remuneration department, your role includes evaluating the salary of your executive board. As a member of the board, you should always be thinking about corporate governance.

Combining these two roles of performance and conformance can sometimes be quite challenging for a non-executive director.

4. You are not meant to get involved in the implementation procedure

You may be a person who is very operational and responsible in your career.

You might think logically and be brilliant at tackling problems head-on to get things done faster and more efficiently.

However, as a non-executive, you may not be used to merely advising on what should be done, and standing back to let others do it can be a habit.

This is because you are not allowed to get your hands dirty and that can be quite frustrating.

But for some, this does not pose a problem.

After working in a high-intensity environment in companies, some people may enjoy being a little laid-back in this role.

If you have worked as a professional advisor, it is always best to let others handle the work.

But it all comes down to how you are as a person and if you would be able to handle it.

5. The need to make decisions quickly and accurately

Non-executive directors need to make difficult decisions in a timely and effective manner. This includes being able to:

Each of these responsibilities requires difficult decisions to be made at times. The ability to make those decisions in an effective manner is critical for the success of the company.

Being a non-executive director is not for everyone, but it can be rewarding

With that said, this role doesn’t suit everyone. It is important to take the points above into consideration before you decide to take on this role.

Plus, the 9-year limit on independent directors also restricts the duration that you can stay on.

Despite these challenges, serving as a non-executive director can be an enriching experience.

You have the opportunity to make an impact on important issues that affect your organisation and the communities it serves.

The challenges can also be a source of personal growth, as you learn new things and work with a diverse group of colleagues.

Related Read: How do I become a director of a company?

Listen to our veterans’ advice

Can’t decide whether to implement non-executive directors or join a company as one? We have sound advice from experienced professionals who can help you make a better decision.